The road to California – Part 2: Mountains.

Approaching the mountains from the prairie is a unique experience.  Your map tells you that you’re getting close, but after so many hours of seeing field after field drift by it is a bit hard to believe.  Then you begin to see something on the horizon.  Of course you question whether your eyes are just playing tricks on you, but there is a seed of hope that it is more than that.  Once past the doubt, excitement begins to set in as the wall of immense rocks on the horizon continues to grow and grow.  From a distance the sheer immensity of those towering peaks cannot be grasped – in fact, the approaching drive always takes much longer than you expect because, even when you are still 50 km away, it feels like just around the next bend you could find yourself at the base of the mountain range.

Mountains are best understood intimately: exploring nooks and crannies with feet and hands; breathing deeply with lungs and nostrils; watching and listening to how land and weather dance with each other; and surrendering to the wind with all of your senses.

On this leg of our road trip we hugged the east side of the Rocky Mountains as we made our way south, exploring the Crown of the Continent all along the way.  This lofty region draws a line separating the watersheds of North America – so from Triple Divide Peak in Montana, water dropped on different sides will end up in the Pacific, Atlantic, or Arctic oceans.  This also means high elevation, gentle prairies meeting windswept mountains, diverse wildlife, and true wilderness.

Approaching from the east, we came up on the mountains at Waterton Lakes National Park.

First view of the mountains.

The road through the valley.

The first photobomb from a mountain critter.  Think: the squirrel who photobombed that couple at Lake Louise.  This critter still shoots film.

Colors of Red Rock Canyon.  Sunny days are best for fording your way up the canyon with your pants rolled up, but cloudy are best for appreciating the colors.

Generally I am not the kind of person to take pictures of wildlife I see along the highway, but these big horned sheep just wouldn’t let us get past.  After slowly following them up the scenic Akamina Parkway we snapped this shot out the car window.

Being early spring, trail conditions were changing so fast at this point of the season that they were a bit of a wildcard.  We didn’t know how far we would make it up this particular trail but this beginning section, dubbed Akamina Pass, was nicely groomed for cyclists.

Feet at Forum Falls.  We were dry up to this point, but as we continued on to Forum Lake from here the trail became snowbound.  Let’s just say that the spray from these falls was the first of much wetness to come.

Blue sky, white ground.  Sweaty from the struggle through deep snow searching for the lake, we finally found the stream again.  The sun was coming out now and avalanches were rumbling around us in the valley.  We decided to turn back for safety, so the little bridge we rested on here was our summit for the day.  Forum Lake would have been a little further up this way, at the top of this creek.

A short ways from the Akamina trailhead is Cameron Lake.  The docks were just put in and we enjoyed the calm of the lake while trying to dry out our boots (they did not dry for days).

Cameron Lake is a good place to sit quietly.  The road to this area of the park was washed out by heavy rain that devastated Alberta shortly after our visit, and this wilderness was closed for most of 2013.  I feel very lucky that we were able to enjoy it when we did.

Our campsite at the base of Crandell Mountain.  Note the bird doing a flyby and checking out our rice.

A curious visitor to our campsite.  This black bear snuck up on us while we were making lunch.  We were able to jump in the car just in time with armfuls of food from the table, but he ate the cheese we were unable to carry and proceeded to explore our campsite.  From the car we watched him put his paws up on the tent, which surprisingly didn’t rip, seeing as his claws cut through the water jug on the table.  Oh, and then he decided to climb up on the rental car and pace along the roof for about five minutes.  There was a point when he put both his hind legs on the side mirror right next to me and I’m pretty sure I stopped breathing.  Amazingly the car remained unmarked.  Throughout the afternoon he kept circling back to our site, so we ended up packing up in the rain to relocate.

Talking with the park ranger we discovered that this young black bear was likely abandoned by his mother and was just trying to survive on his own.  Unfortunately he was becoming too comfortable around humans and a point was now reached where they were going to have to step in to do something about it.

His and hers, blowing in the wind at our new campsite near the safety of the townsite.

Driftwood on the shore makes for great benches. 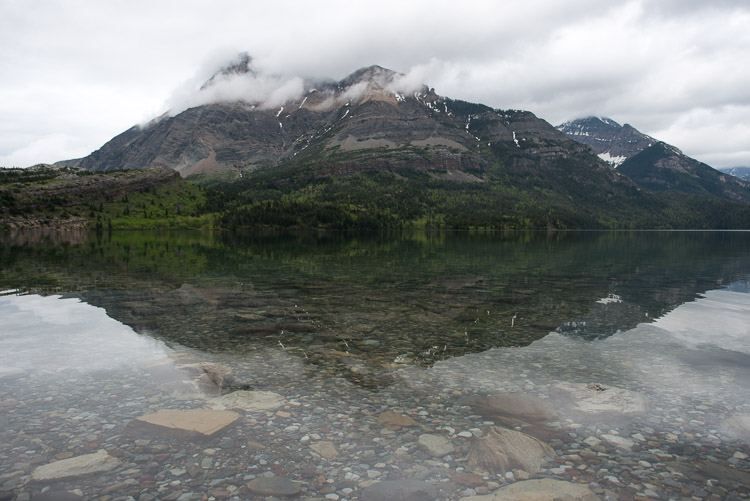 The colorful rockbed of Waterton Lake.

Access to the Crypt Lake trailhead is across the lake from the townsite.  A ferry drops you off in the morning and picks you up at a particular time in the late afternoon.  Don’t be late or you’ll have trouble getting back to town!  This is a popular trail that was voted best hike in Canada back in 1981.  I’m told it is quite busy in the summer but this early in the season there were only two other couples joining us on the trail that day.

Past Burnt Rock Falls, we started to encounter steep and icy snow slopes covering the trail.  The surface of the snow had been melting and refreezing daily under the intense alpine sun, and as such was incredibly icy.  Stepping on the snow would quickly send you sliding down the mountain, and that would most likely be fatal with the exposure on this section of the trail.  The only options were to either scramble around or turn back.

Snow covered sections of trail became more frequent as we gained higher elevation, and the difficulty in getting around them increased as well.  Here, I left the trail to scramble up the backside of Vimy Mountain to scout out a better view of the trail ahead.  After getting my bearings I determined that we shouldn’t risk going any further; the snow only got worse and in the distance I could see the final high exposure face, just before the tunnel for those familiar with this trail, was impassable without an ice axe.

Sometimes panoramas are best for showing the vastness of a scene. Here, you can see the valley we hiked up from on the right and Crypt Falls in the distance to the left.  This is a huge image and the impact of it is somewhat lost when scaled down, but you can also see a dot of color in the center where we rested, spread out on a yellow sarong.  This was our peak for the day, and the view was something else to behold.

Crypt Falls in the distance. Crypt Lake is in the basin above the falls.

Taking in the view of the valley under us to appreciate the ground we had already covered.  The little dots of color (yellow and red) in the bottom left of this image is our little picnic site.  We were only up here for about half an hour, but we made the early season mistake of not realizing just how burnt our skin was getting despite the cool air temperature.

Cooling a well earned beer in the lake after a long day hiking.  This was the last beer from home, and it was a special one I had been saving: Le Temps Noir by Half Pints.  It is an incredible brew anywhere, but it is on a whole different level when paired with a sunset like this.

We enjoyed our time in Waterton, but after a week it was time to move on.  We planned to return on our way home, but the time had come to cross down into the United States.  Before leaving, we hiked to the top of the Bear’s Hump which gave an incredible view of Waterton nestled in the entrance to the mountains.

The epic Going-to-the-Sun Road that cuts through the heart of rugged Glacier National Park.  It really is amazing that a road through this wilderness was even considered possible, especially considering it was built back in the 1930s.

The immense scale of Glacier’s mountains is humbling.

This road is the only one of its kind in the area, and even so it is closed most of the year due to snow coverage.  Here we are at June 6th and they’re still working to clear the road past Gunsight Pass.  I’m sure that the plowing operation would be a spectacle to behold.

Doubling back to Many Glacier campground for the night, we experienced yet another beautiful entrance into the mountains. There is no north-south driving within the mountains here. You have to exit the mountains to the east, drive your north/south along them, and then cut in where you are able. The thing is, every way you come at the Rockies, they are just so beautiful.

Our campsite in the Many Glacier region of the park.

With the lingering snow covering so much of the higher elevations, hike options were rather limited.  At the recommendation of a ranger we left the Going-to-the-Sun Road at the Gunsight Pass trailhead and took a trail to Florence Falls.  There was a lot of dead forest on this hike, leaving us puzzled and concerned.  Later we learned that forest fires are critical for maintaining healthy biological diversity here, and a side effect of humans recently preventing this natural cycle of fire and rebirth is that when a forest gets old, it all dies at once.

At the base of the raging Florence Falls.  With the melt in full swing, the water was flowing strong over the 800 foot drop, to the point where if you went anywhere you could even glimpse the falls you would be soaked by the spray.  Best to have a snack a distance away and just listen.

The next day: petrified trees cover one side of the mountain as we traverse the switchbacks to Scenic Point.

Loose shale made for interesting scrambles.

Panoramic view of Scenic Point. To the left is Two Medicine Lake and campground; to the right is yet another entrance from the prairies to the mountains.

In the distance, a couple hikers appear as dots at the tip of the overlook.

Even at the high elevations, colorful mountain flowers are quite plentiful.

After cleaning up in a frigid creek a couple hundred feet off the trail, a mountain goat is herded towards us as it tries to keep ahead of a loud group of hikers behind it.

Before beginning a long day of driving south, we take a few moments to watch the clouds cast shadows on mountains as the sun rose behind us over Two Medicine Lake.

After spending some time in the alpine it is time to continue our trip south. Through Montana, Idaha, and into Utah.  Soon enough, the terrain and weather would change dramatically.

« The road to California – Part 1: Prairie.Subscription service is now available! »

Copyright © 2008-2021 David Quiring. All Rights Reserved.
Contact with regards to any publication or purchase requests.
a creativelittledotcom creation.